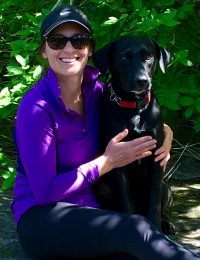 Dr. Barloon grew up in Costa Mesa, California. She received a degree in Biology from the University of Washington in Seattle. After finishing her undergraduate degree, she stayed in Seattle and worked as a dog walker and veterinary assistant at a local emergency hospital until moving to Manhattan, KS in 2013 to start veterinary school. She earned her DVM from Kansas State University in 2017 and moved back to California. Dr. Barloon has been at Old Towne Animal Hospital since July 2017 and enjoys being a part of such a friendly and collaborative practice.

Dr. Barloon has a lab mix named Luca who accompanies her to work most days, and a cat named Gio who happily stays home. When she’s not at work she enjoys hiking, running, trying new restaurants in the Sacramento area, and traveling.

We want your feed back!
Please take the time to participate in this brief survey.

We are proud to be AAHA certified! Learn more about what this means for you and your pet.